The nature of reform, integrity, and working in public purpose: A wrap up of IPAA Queensland’s 2022 Irene Longman Oration

“People have stereotypes of public services. But there is a huge amount of really exciting work in government, and it is government at the end of the day which has to carry the burden of society’s heaviest challenges.

And so, there is a real challenge there in enthusing people and in inspiring young people.” 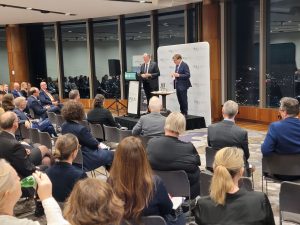 On 20 October 2022, IPAA Queensland hosted a flagship event in our annual program – the Irene Longman Oration.  The Oration is named in honour of Irene Longman, the first female elected to the Queensland Parliament (1929-1932) and dedicated ‘public servant’ to the community for over 30 years.

Her values and legacy include safeguarding the welfare of women, children and people with intellectual disabilities; establishing the first education opportunity classes; the first women police in Queensland; creating a separate Children’s Court; and for the appointment of an advisory panel in difficult cases of juvenile delinquency.

The 2022 Oration was delivered by Emeritus Professor Peter Coaldrake AO under the theme “Pride and purpose in service”.

As shared by Professor Coaldrake with regard to the nature of reform: 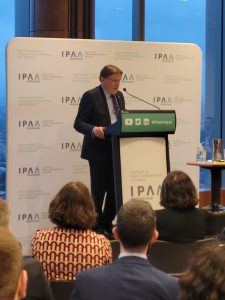 During the Oration Professor Coaldrake spoke of his time in the Public Sector Management Commission (PSMC) established by the Goss government in the 1990s. During this time he led significant sector-wide reform, particularly with respect to management and Human Resource (HR) practices. He spoke of the deep impact that such public sector leadership experience has had on his approach, including in the context of his 2022 review of the Queensland Public Sector.

“There was a lot of criticism about the pace of reform and we certainly made some mistakes. From time to time, I think we indulged in complexity unnecessarily. I think one of the things that I’ve learned, and we tried to make clear in the outset of this report, let’s keep it simple.

Try and keep the language simple.

But I think we indulged in unnecessary complexity at the time and we learned from that.

The initial set of public sector management standards, HR standards for things like recruitment and selection and so on, they were much simpler in the revision than they were in the original crafting.

And I just think that was a lesson that was learned along the way. And it was a good lesson.

Queensland, as I think we all know, was a fairly late mover into this whole space of public sector reform. But having made that shift, it was a rapid mover and the framework we have, the integrity framework we have now, is now quite a settled one. And in the sense, one of the purposes of the review that was undertaken this year was to look at that, it’s condition.

Obviously, some of the stresses and strains that have been evident publicly from that in which some of you will know of through the work of your agencies. But in a sense, those are natural things about a system that’s in a state of maturity, that it’s got the ability to look at itself and then to move forward.”

In addition to the above, Professor Coaldrake reflected on his career, his time in public service, his studies and his experiences in reform.

When discussing integrity in public purpose:

“The metaphor I picked in the report was to say an integrity system is like a traffic control system.

It needs coordination, it needs regulation, probably needs updating, especially when dual carriage feeds becomes single lanes and all the rest of it.

I’m not seeking to be trite, but I do think that the analogy is a relevant one.

A strong view that no one agency should seek to own the integrity space. To do so is not exactly with not exactly consistent with the notion of a healthy system of checks and balances.

I think some of the integrity related bodies, as they’re called, will be larger, some are smaller, but I do think that the whole question of the integrity system just should be viewed as being dynamic and in a perpetual state of transition as the demands of the community and the workforce or whatever, they themselves change.”

An additional insight into working in the public service:

“Some of you got kids, some of you got grandchildren, you certainly got families and friends. And millennials think very differently about jobs, about careers, where the balance of time where they should spend, about loyalties and matters like this. Some of those are quite challenging views for us of older stock. But it does tells us that we’ve got to think radically and keep on thinking radically about what career looks like. And I think that no, well, I think a lot of us accept the notion of 16 to 60 or 17 to 70.

At the end of the day, if people find the work exciting, people find that government is actually dealing with the most intractable problems that society has, then they’ll be attracted to government.

But don’t kid ourselves about whether they’ll stay there forever.

But nor is that a bad idea.

A lot of people may come in, they know they’ll only be there for a year or so but then they go out and they fertilize their experience and they might come back later and that’s all good.

But if their experience in government has been positive, then that’s only going to encourage them to do so.”

Needless to say, there were several important insights shared by Professor Coaldrake on the nature of public purpose work.

This event saw attendee’s thinking challenged on a current and relevant aspect of public purpose work through the lens of Professor Peter Coaldrake’s distinguished career.

IPAA Queensland would like to extend the warmest of thanks to Professor Coaldrake for delivering the 2022 Irene Longman Oration, and for his dedication to public purpose work.

Our members can watch the full recording of the Oration and the audience Q&A here on the Member Portal.