In partnership with Griffith University Policy Innovation Hub, IPAA Queensland’s webinar addressed a topic that is critical to the integrity of Australia’s democratic system – caretaker conventions.

Facilitated by leading authority on caretaker conventions, Jennifer Menzies (Principal Research Fellow, PIH), the webinar examined the purpose and evolution of caretaker conventions and some of the challenges and debates on their application through past controversies, including the Tugun Bypass. 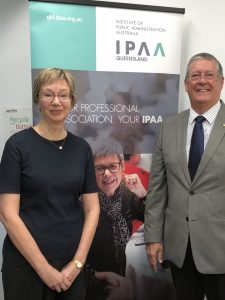 Some of the highlights are captured below.

Conventions are not legally binding and therefore are not subject to judicial interpretation or enforcement through the legal system. Sanctions against breaches are both moral and political. Political sanctions are those that come from media and public scrutiny of political behaviour, which can be costly to the perception of the government.

Although conventions are not legally enforceable, sanctions for breach of impartiality by the bureaucracy are more real and enforceable than the moral and the political sanctions that apply to politicians.

Public servants are bound by their relevant codes of conduct and one of these is the need to act impartially and with integrity. This is reinforced by penalties within the Public Service Act 2008 that allow for termination and other sanctions if the code of conduct is breached.

If public servants have been found to have acted partially during an election campaign, even if they did so under the direction of a Minister, it amounts to misconduct and grounds for disciplinary action.

To illustrate the challenges in applying caretaker conventions, Jennifer discussed some of the areas of controversy, such as senior government appointments and major policy announcements, along with the political and bureaucratic issues arising during the 2012 Queensland state election.

Jennifer discussed this case study to highlight how public servants’ good intentions can trump careful consideration of the conventions during a caretaker period.

During the 2004 state election campaign, Premier Peter Beattie announced a proposed route for a bypass road known as the Tugun Bypass at the southern end of the Gold Coast. It had been very controversial for a long time because different routes were considered and then dropped. This proposed route would mean the resumption of 14 houses. It’s important to note that officers from the Department of Main Roads were advised of the announcement the night before and then asked by the Minister of Transport to inform the affected residents. So with limited time, they sent a letter to those residents.

After the election, the then Crime and Misconduct Commission (now the CCC) received a complaint from the leader of the opposition who said that the bypass announcement involved a breach of both the spirit and the letter of the caretaker conventions. He claimed a lack of impartiality from the Department of Main Roads officers who he said acted in a politically partisan manner to implement a major government decision during an election campaign.

The CMC report is the first time you’ve ever seen in detail this kind of 360 degree look at what happens in the heat of an election campaign specifically around caretaker conventions. The CMC accepted the complaint, and then quickly found that because of the lack of legal standing of conventions and alleged breach of the conventions by a member of Parliament, it was not a matter they could investigate; it’s not official misconduct. While Peter Beattie was off the hook so to speak, the CMC did believe that a standard applied to public servants. The public servant who breached the conventions came under the then Crime and Misconduct Act by acting in a way that was not impartial under the Public Service Act.

In the end, the CMC did not recommend disciplinary action against the officers involved because they concluded that had not colluded to achieve a political purpose.

What other options were available for those departmental officers that night before the announcement? What sort of advice should they have been giving to their Director-General? And potentially for the Director-General to give the minister?

Yes, it’s interesting if you look at the report. The public servants who are the regional officials of Main Roads at the Gold Coast had a very clear sense and obligation to those stakeholders whose houses were going to be affected. What you do with the 360 is you get you get the different way that different people are approaching it. Their sense was, we have to get down there before the Premier announces it, that their houses are going to probably be resumed. They were coming to it from a place of service to the community. And it was that group that actually drafted the letter.

This was not a breach of the caretaker conventions except for the letter, which we’ll get back to, because the Premier was announcing a policy to be implemented after the election in the case that they won government. Where it went astray was the letter. If you look at the letter closely, it didn’t put that caveat on. It said the Premier today announced a proposed route which has the least impact on the broader community. Following the Premier’s announcement, I advise that the proposed route will have an impact on your property. They just needed to add in a caveat about, if this government is re-elected this will have an impact.

And the problem was that people were coming in at 5am that morning. This started the night before; the Minister rang the Director-General late. He got onto the area office and people were coming in very early and this letter was toing and froing. The Director-General has the right to push back against the Minister if it is a clear breach of caretaker conventions, but this was not if it had been executed correctly.

But in the heat of the moment, particularly for public servants being asked to prepare correspondence urgently for consideration to go out to members of the public, these are important issues. It’s always important to, if you are concerned about these sorts of things, to simply ask advice, probably one of the most knowledgeable in each Department would be the CLLO, the Cabinet Legislation and Liaison Officers who would have very clear understanding of these issues and are a great source of information.

If the letter had come from the Premier, it wouldn’t have been a breach because people would see it was contingent on his being re-elected. During election campaigns, politicians can make as many commitments as they like; this is their pitch to the electorate. It’s because this letter came from the public service that it was not seen to be impartial.

And if you’re a junior public servant, this does not fall on your shoulders. There’s a lot of support around you. You’re not on your own, and you need to escalate it. Send it up to where the expertise sits.

Some final words of advice

People tend to think of the caretaker period as the 26 days within the election campaign, that once the Saturday Election Day is here, it’s all over. But in close run elections it can be a long time until the vote is counted, and we know whether there’s a clear majority. Or if not, whether a minority or coalition government has to be formed. If that government formation has to happen, that can take time, sometimes over a month or more.

People are mentally prepared to put everything on hold for the 26 days, but if you then have another few weeks or more after that, it gets a bit complicated because you have to keep things on hold. Cabinet is still not sitting. There is no Executive Council, there’s no Parliament.

The basic principle to remember is that the government before the election remains the government until the next government is formed. There is that continuity of administration. The practice has been that any decisions that might bind an incoming government be deferred or be handled by temporary arrangements or be subject to consultation with the opposition if decisions have to be made.

This speaks to the viewer’s question before about crises – how COVID-19 might impact the decision making of the chief health officer? The reason why you need a continuity of government within the caretaker period is because of crises … the government that goes into the election period remains the government for that time until a new government is formed. So Cabinet and Executive Council normally don’t sit during caretaker but there is a provision that if there is a major terrorist attack, disaster, and I think the COVID-19 pandemic comes into that. The chief health officer has statutory powers that aren’t reliant on ministers. I would imagine, and I don’t want to get into the nuts and bolts of it, but because the opposition will be seen as a government in waiting, there would be greater briefing of the opposition, particularly if some kind of announcement is made.

In closing, although the principles of caretaker seem simple, their application relies on judgment, the knowledge of precedence, and a desire to see a continuation in upholding of the convention. Interpretation, however, is often subjective, situational, and context dependent.

To download a free copy of the highly successful monograph Caretaker conventions in Australasia: Minding the shop for government by Jennifer Menzies and Anne Tiernan, click here.